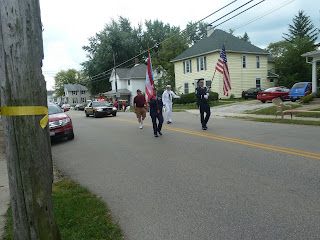 We know that summer is over when we watch the South Vienna Corn Festival parade go by our house. The handsome man carrying the American flag is indeed my husband in his US Air Force Honor Guard uniform.

Which brings us month into the school year. Alanna and Neal have both declared their independence from scheduling by asking to do their school on their own, mostly. Alanna, in particular, has an ulterior motive:  she wants a hamster. To get permission, she has to do her lessons regularly and without fail.

So far, she's adapting well. She often will do the whole week's health reading in one day, then math on another day, etc., but that seems to work well. She finished her history book entirely in a few long sittings.  She does do Spanish every day, though, since it's important for achieving any real fluency.

Every week I leave messages for the kids on what needs to be accomplished. Every day we meet for a while to talk, look over assignments, talk some more, check Neal's Khan Academy math progress, talk a while, play a game, etc. This seems to work well.

So school right now has a structured period of 'checking in', an obvious set of expectations, and a fair amount of freedom.

Posted by Unknown at 3:44 PM No comments:

Via: Online College Source
Posted by Unknown at 11:16 AM No comments:

I'm hard at work devising our plans for the next year of school. Neal is pretty much a junior, though he needs a math credit. Alanna is beginning her freshman year.


Those of you who know our family are now asking yourselves, "They really need to teach their kids to argue? I thought that  the kids do a fine job already!" But no, this is basic logic and beginning debate. Various informal fallacies are introduced, with creative illustrations and faux ads to bring it all alive. We had  a some interesting discussions last year, mostly centered around the use of fallacies in politics, media and religion.

This year, we will move on to the second book, The Discovery of Deduction, which introduces more formal logic. In it, we'll discover Socratic dialogue, reducing arguments to symbols and much more.

We don't usually spend a long time at it. The books seem to be so effective that Allie and Neal remember without having to drag it out and reteach repeatedly. It's  a nice way to begin a school day. Logic gets their brains in gear and prepares them for the joys of math!
Posted by Unknown at 12:44 PM No comments:

A Visit to COSI...and a strange thing...

We made one of our frequent trips to COSI - the Center of Science and Industry in Columbus - and had a wonderful time. Prices have gone up and discounts have gone down, but we bought a yearlong membership, which cost a little more than our single visit would have cost.

We were a bit surprised, though, to find this in the Science Store: 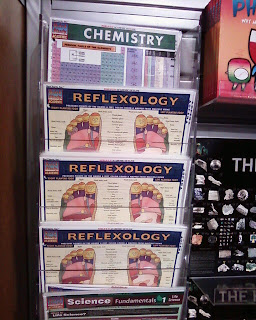 I like a good foot massage as well as the next girl, but it won't cure cancer or asthma or much of anything, as has been proven by numerous studies done by actual scientists.  So why is it in a science museum? I asked the people at the checkout, who said that "some people" believe that there "might " be evidence for FR as an actual medical treatment of value. "We like to keep an open mind."

Ever heard of the Placebo Effect?
Posted by Unknown at 9:05 PM No comments:

The snow and ice finally turned to rain,drenched us for two solid months, then settled in to a more usual pattern of extreme heat, dotted with heavy storms and frequent tornado warnings. Our weather alert radio has certainly been busy these past few weeks!

Neal and Alanna once again opted for Standardized Tests rather than building portfolios for the year-end evaluation required by the State of Ohio. They were both in the top one percent, which Severus Snape would call "acceptable."

This past year was quite interesting. A few high points:

Alanna continued her reading and writing gains. She has finished three books, but she says that they are not worthy of publishing.

Neal continues to scarf down and absorb facts as quickly as he does food, which is saying something. He's also quite adept as Tech Support.

Thanks go out to CK12.org and KhanAcademy.org for brilliant resources! It's wonderful to have someone actually explain algebra in a video or on an e-book so cogently.

Neal started a novel, which began brilliantly but soon fizzed out. I'm still wondering how the story would have gone!

We charted Neal and Alanna's progress in high school subjects. Neal is through nearly two years, and Alanna has about 1/2 a year of credits.


The return of Deathly Heat must mean that school is over, more or less for this academic year - except for the frequent educational excursions and activities that we do in the summer as a matter of course. Since we've discovered the Blue Star Museum program, which allows military families free admission to hundreds of museums across the US this summer, we've been salivating over the lists. COSI, Westcott House, Boonschoft Museum, Columbus Museum of Art...they're all on there, and they only cost the (substantial) amount of gas money that it takes to drive there. If gas was cheaper, we'd be on the road weekly, hitting nearby states, but that's a fantasy for the future. Right now we'll just stay close to home, except when we visit Renee or Claire.

I'll be back soon with news of Next Year's Plans. Until then, please enjoy this shot of a Very Educated Baby: 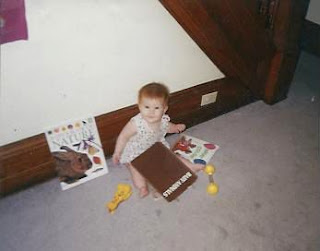 Now guess which baby that is!
Posted by Unknown at 1:52 PM No comments:

All Comments
See what we use in our homeschool at my Amazon Store!
Be sure to check out my cooking blog, Attack of the Broccoli

How do your children grow?